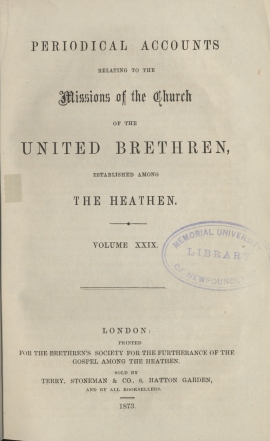 Een voorbeeld is 1829, vol. 11: Periodical accounts relating to the missions of the Church of the United Brethren established among the heathen

Extract of the Diary of the Mission at Paramaribo, for the former part of the Year 1830.

Pagina 336 en verder
[Jan] 25th. A negro, called Hendrik, belonging to the plantation Bergindaal  [Berg en Dal], situated near the Blue Mountains, came today, and expressed a wish to be received a member of our church, for which he had the consent of his overseer. He was a man of friendly aspect and snow-white hair, and his conversation interested us much. We were glad to learn, that by means of a Sarameca negro, named Francis, who is able to read, not a few of the negroes on the above-mentioned plantation had been awakened and led to inquire—" What they must do to be saved."
[...]
In the course of this month, a mulatto woman, by name Jaquelina, was frequently visited by us in prison. She is a slave, and a heathen, and seems never to have given herself the smallest concern about the state of her soul. The crime of which she had been guilty, and for which she was about to suffer, was an attempt to poison her master, who had always treated her with great kindness, and brought her up from childhood in his own family. She endeavoured to effect this purpose by mixing arsenick in his chocolate: but by God's mercy, though both himself and a negro maid-servant drank of it, their lives were saved. Jaquelina did not hesitate to confess the fact, but appeared, at our first interview with her, perfectly indifferent as to the consequences. By degrees, however, we had the pleasure to see a real change wrought within her. She listened with attention to the declarations of Scripture, became truly awakened to a sense of her lost condition, and acknowledged herself to be a miserable sinner, deserving not only of temporal but also of eternal punishment. It became now our delightful duty to point out to her the Lamb of God, which taketh away the sin of the world: and great was our joy, to perceive, that our feeble testimony was accompanied with the demonstration of the Spirit. She was at length enabled to declare, " I am indeed a wretched sinner: but I believe in Jesus, who died upon the cross, and shed His blood for the remission of my sins, and I beseech Him to pardon and receive me."
On the 26th instant, she was baptized at her earnest request, and called Magdalen. On this occasion, the doors of the prison were thrown open, and as many as wished to attend, admitted to the solemn service. All present were deeply affected, and many tears were shed.
On the following day, she was led to the place of execution. Her sentence being once more read to her, she turned to the magistrate and officers in attendance, and said, in a firm tone of voice —" Permit me to say a few words, before I leave this world." Leave being- given, she continued: " Here, I know I can expect no mercy: I have yielded to a temptation of Satan, and committed a great crime. Of the consequences I was altogether unmindful: but perhaps it was for my eternal good that I was brought into this situation. My thoughts are now directed to another world: and to that Saviour, who can and will be gracious to the vilest of sinners. Lord Jesus, into thy hands I commend my spirit."
On her way to the gallows, she again exclaimed aloud: " Lord Jesus, I beseech thee, receive my soul." The needful preparations having been made, she ascended the ladder with firmness, and in a few minutes was turned off. She had not, however, been suspended many seconds, when the rope broke, and she fell to the ground. Before she could be raised I hastened to her, and said, "Magdalen, are you praying' to the Lord Jesus?" She answered distinctly, " Yes." A stronger rope was now procured, and after the usual painful preparations had been a second time gone through, she was launched into eternity. The whole scene, and especially the composed but penitent demeanour of the poor criminal, appeared to make a deep impression on the spectators.

pagina 338
March 7th. A sick free negro, by name Sans-souci, was visited, who expressed his feelings in these words —" I am a sinner, and have committed much that is evil: but I desire to present myself before my Saviour, just as I am, with all my sins and transgressions. I look towards the cross, and cry to Jesus for pardon."
This negro, who is of the Sokko nation, has been a Mahometan, and is circumcised. He has always abstained from the use of spirituous liquors, and has been in considerable repute for the cure of external wounds, possessing some knowledge of indigenous herbs and their virtues. He is now suffering from a severe disorder; and on being asked, whether he could not discover some remedy for it, he replied: "The physician cannot cure his own diseases."

pagina 339 en 340
We had again occasion to visit a poor negro lying in prison under sentence of death, and to commend to him the mercy of God in Christ our Saviour. The unhappy convict, whose name was Nieman, had murdered his wife in a fit of jealousy, by a blow on the head with a cutlass. At our first visit to him, he seemed awakened to a sense of his guilt, declaring to us at the same time, vvith much emotion, that he had never, till he came to that place, (the prison), heard of God or his holy word. He had indeed been aware, that teachers visited the neighbouring estate, Breukelwaerd, and baptized the negroes, but he had never felt disposed to attend their ministry. He now appeared to receive with eagerness the blessed truth, that Jesus Christ came into the world to save sinners, often exclaiming, " Oh, if I had heard all this before, I should never have lifted up my hand against my wife. All that is now told me of a Saviour I believe: I feel I am a sinner, who deserves death, and I therefore rejoice that Jesus has shed His blood for the remission of my sins. Oh, that He would have mercy upon me. I hear that I am to die upon a gallows: I do not fear to die, if l could only be assured ofthe pardon of my sins. And I feel already a joyful hope, that this assurance will be granted me." Thus gladly did this poor benighted heathen receive the message of salvation, and, being made obedient to the voice of the Holy Spirit, attain to pardon, peace, and rest for his soul. At his baptism, which took place shortly after, in the presence of many spectators, he received the name Christian.
His execution followed, on the 3rd of May. On this awful occasion, he conducted himself with equal firmness and decorum, intreating from his judges as a last favour, that his children might be taught betimes to know and fear the Lord. His last words were: " Lord Jesus! be merciful to my poor soul."

Pagina 494 (op Berg en Dal)
Many negroes came and saluted us in a most friendly manner. A negro woman brought a newly-born infant, and said, " The mother of this infant has lost all her children; perhaps, if the minister will pray for her in the church, God will be pleased to spare the life of this child."
On inquiry, I soon found that it would be impossible to have Divine service with the negroes before Sunday, as, during the week, they are all engaged in their several labours in the forest and upon the creeks, and seldom return home till the Saturday. They have regularly appointed tasks, being expected every week to deliver to their employers a certain quantity of timber and boards; the latter are therefore unwilling to take any step that might interrupt the course of their ordinary occupations. The number of negroes on this plantation amounts to 238; none of these are Africans, all having been born in this country. They have, for the most part, a healthy appearance. For the cultivation of their provision-grounds, not more than twenty days in the year are allowed them, yet they seem to be supplied with a sufficiency of wholesome food, besides abundance of excellent water. The work in which they are engaged does not appear to be of the most laborious description.

Pagina 496
An aged negro, by name Hendrik, who had called upon us some time since, in town, and requested to be baptized, was now visited on his sick-bed; he earnestly repeated his wish that this privilege might be granted him, adding, " Formerly, I was blind and stupid, and eagerly followed all the superstitions ofthe negroes; I have now renounced them all, and wish to surrender myself to my Lord and Saviour; I believe that I am a sinner, and that Jesus Christ has shed His blood and died upon the cross for me; I entreat Him to forgive all my sins." After some further conversation with him, we felt satisfied that we might grant his request. He was therefore baptized into the death of Jesus, by the name of Mark, in the presence of many of his countrymen.

Pagina 497 op plantage Lustrijk
July. THE negroes on the plantation Lustryk, where, for the last five years, permission has been given to our Brethren to preach the Gospel, made known to us their intention to listen to the word of God no longer. Although sunk in the grossest ignorance and superstition, we have every reason to believe that this is not a spontaneous act on their part, but that they have been persuaded to it by some evil-disposed persons. Four of their number gave us, nevertheless, to understand, that they dissented from the resolution of their comrades, and should feel thankful still to enjoy the benefit of religious instruction.

Pagina 500 Ernestina en de vrije Johannes Fortuin overleden
[September] On the 26th was the interment of the mulatto sister Ernestina, who had reached the great age of 98 years. A few months ago, a free negro of our congregation, by name Johannes Fortuin, departed this life at the age of 100 years.